Full results will be available at http://www.englishcrosscountry.co.uk

There is plenty of coverage at http://www.athleticos.org including videos, which you may like to see prior to myself getting video etc on this site.

James Thompson, who is at Bristol University, ran in this evening 5k road race and finished an excellent second in 16.14. James finished just five seconds behind the winner, Callum Jones, of Cornwall AC.

More good news this week was received from Jack Keywood, who is at the University of East Anglia. Jack is back into his running and has emailed an update for the Distance Runners Diaries 2013 page.

Four TAC athletes underwent some performance testing at Canterbury on Monday. See some video clips on the Training Completed page. Sean Molloy, Corey De'Ath, Tom Cox and Alice Wood should receive their reports towards the end of the week.

Alex and Tom have sent in updates over the last couple of days to let us know how their early days at university are going. You can read about them on the Distance Runners Diaries page.

Other weekend results include -

Photo below of Ben Cole, Dan Bradley and Julian Rendall at the Great South Run. 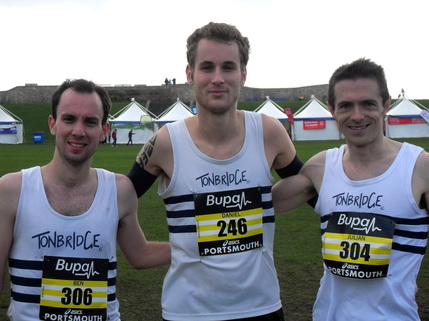 By my calculations I think we had 99 starters across all the races today. An unfinished summary is on the results 2013 page, but have all the team and individual complete results there. In summary -

Under 13 girls 1st (2nd Kelsi Cornish) 10 runners in top 15 ! 15 athletes is a record number of TAC starters in a Kent League). Note – Agnes McTighe ran as a guest (lives in Switzerland) in a TAC vest and won the race. She is a cousin of the Nicholls family, although not a TAC member.
Under 13 boys 1st (1st Charlie Crick)
Under 15 girls 2nd
Under 15 boys 1st (1st Alasdair Kinloch, 2nd Jamie Goodge, 3rd Tom Kendrick)
Under 17 women 3rd
Under 17 men 1st (2nd Stuart Brown)
Senior Women 1st (3 to score) (1st Miranda Heathcote, 2nd Nicole Taylor). Also won 6 to score vent and 13 athletes was a senior womens race TAC record.
Senior Men 2nd in 4 to score (lost by 1 point) and 2nd in 12 to score)
More photos will appear at www.tonbridgeac.co.uk although unfortunately I lost a disk that held many from the younger races. If anyone has any please email markhookway@aol.com . There are also photos proved by the Courier newspaper at http://www.courier.co.uk/pictures/Kent-cross-country-league/pictures-19994750-detail/pictures.html
Photo below of the record breaking under 13 girls squad who had 10 athletes in the first 15 home.

Some of TACs senior women below - 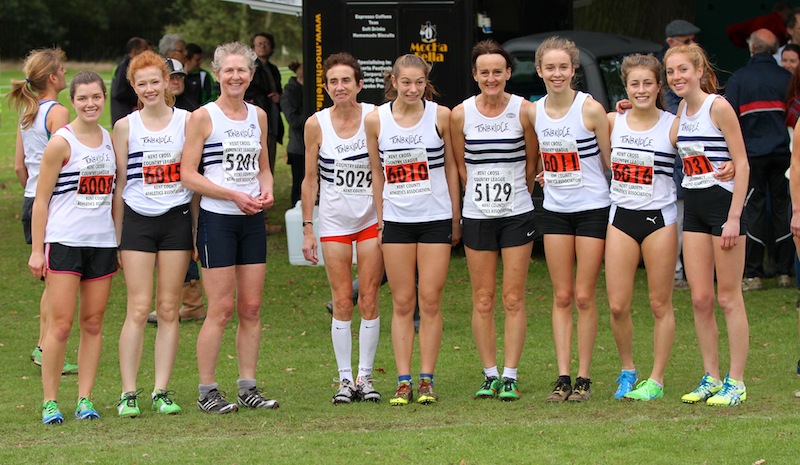 Photos below - some of the action from the Kent League, including Nicole and Miranda leading the senior womens race.

There were 81 entrants for the junior 1 mile races, held on the fields at Tonbridge School. TAC's Lizzie Miller was the first girl home in around 6.10 and Finn Croll was second in the boy's race, as about four runners dipped under six minutes. Full results are on the Results 2013 page.

On Saturday morning Graeme Saker (over 50) finished 2nd in the Maidstone Parkrun in 17.23.

On Sunday morning, Dominic Brown, who is at Sheffield University, finished 2nd in the South Yorkshire Cross Country League fixture. Full results are at http://www.sycaa.co.uk/uploads/59/c9/59c9eb7c00deb6ca9be8575ed12782cd/Clifton-Results.pdf and also posted on the Results 2013 page.

Also on Sunday, Sam Bradley won a half marathon in Ilinois, USA in 71.58. See the following link to an article in the local paper.
http://www.pjstar.com/news/x825423045/Promising-first-run-for-half-marathon-as-Bradley-wins-race-in-1-11-58-Banister-first-woman-in-1-30-13

Saturday 19th October - Training at One Tree Hill, near Underriver

We had about 40 athletes training at One Tree Hill on Saturday morning. Details are on the Training Completed page. Most who attended are in the photo below.

There were three TAC athletes running for their universities at Parliament Hill. The event is quite low key and many of the athletes use it as no more than a training run. Robbie Farnham-Rose was 3rd, with Ryan Driscoll 13th and Chris Lloyd 29th. Full results are on the Results 2013 page.

John Harley ran 3.04.40 at the Chicago Marathon and was second in the over 60 age category. This was also a Tonbridge AC age 60 record and bettered his own over 50 men's record (Sally Musson's women's over 50 time is quicker)

Joe Watts ran 43.50 to finish 57th in the Petts Wood 10k on Sunday, which was outside his pb, but apparently the conditions were horrendous.

The rain was lashing down from the moment that we arrived until about 3pm, but the team spirit was excellent. It was good to see so many athletes and supporters cheering others on.

The under 15 boys excelled in winning, but there were plenty of encouraging performances. Toby Ralph had been moved into the under 17 mens A team, after George Duggan withdrew (ill), but suffered a bout of chest pains that slowed him dramatically. A top six or seven placing was on the cards there aswell. Photos below starting with u15 boys team of Jamie Goodge, Alasdair Kinloch and Tom Kendrick.

Tonbridge AC qualified two mens teams to the championships for only the second time ever and they finished 22nd and 37th from 78 finishing teams.  Full results are on the Results 2013 page.

The 22nd place equalled the best ever performance, achieved in 1996 (the 2012 team was 12th at Clumber Park, but the race was weakened, having been swiftly re-arranged).

It was a solid performance and the two teams we had put in a big effort. It was just unfortunate that so many had been suffering a bit with colds and/or were only just getting fitness back. The fact that we had the fifth B team home shows the strength in depth is growing.

There were some schools events taking place on Thursday -

At the Schools at Somerhill there was an IAPS (Independent and Public Schools) event, where there were wins for Charlie Crick, Vita de Munck and Rebekah O'Brien (soon 11 years old and can compete for TAC). Full results are on the Results 2013 page.

There were also some English Schools Cup first round events going on. Results of the Sussex area are posted on the Results 2013 page. There were wins for Tom Kendrick (inter boys) and Kelsi Cornish (junior girls)

John Harley is due to race in Chicago on Sunday. We wish him well as his last experience was in Boston, where he missed the bomb attack by about half an hour.

James Thompson (pictured here with Nicola Wilkinson) has sent through a quick update of how he is getting on at Bristol University. See the Distance Runners Diaries page. 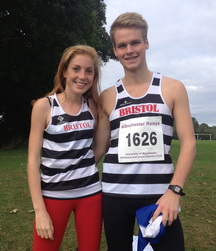 With a few last minute withdrawals we ended up with 97 athletes running at Swanley, with quite a few making their first appearance in a Tonbridge vest at cross country. In summary -

Summary and full results on the Results 2013 page

From Adam Styles, who ran in the senior mens race -
I just wanted to say a massive thank you to all associated with TAC who provided us with such fantastic support around the course during the races at Swanley Park today. Running up the hill through a corridor of noise, much of it made by those supporting TAC athletes, was an amazing, inspirational experience. Thank you everyone.
Adam
Photos below of TAC's top female finishers in each race -
u13 girls Kathleen Faes (1st), u15 girls Genny Allan (10th), u17 women Sian Driscoll (3rd), senior women Ruth Bourne (4th) 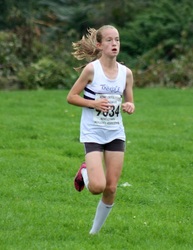 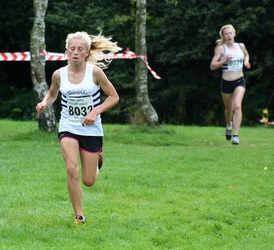 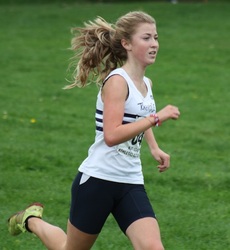 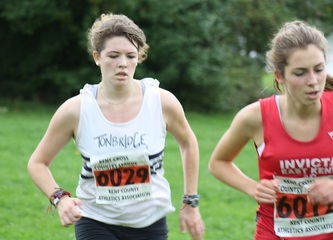 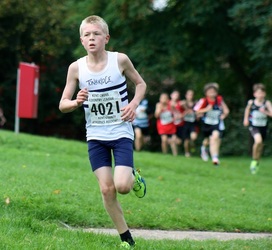 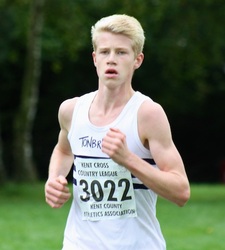 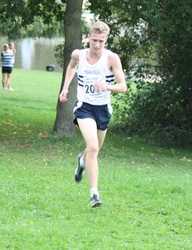 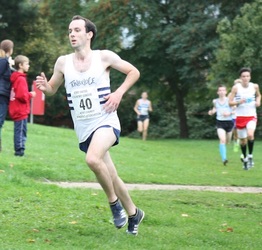