Since I last updated you all quite alot has happened some good and some bad.

I finished off the indoor season at Conference where I ran fairly average but considering ide come of the back of a 75 mile week and not many track sessions I was satisfied.

After the indoor season I immediately turned my attention to the Outdoor season. My 1st race of the season was scheduled to be at Mount Sac where I would have the opportunity to run fast. Training went really well leading into the race, but during my last track workout before the race i picked up a calf problem and didn't get the opportunity to race. The decision was made to red shirt me this week so I wont be racing till im back home.

While ive been out here in America ive completed some sessions (for example 8x1k and 10x400) much quicker than I ever have before. That suggests to me and to the coaches out here that its worth committing the next few years of my life to the sport. There are no promises that im going to succeed but im going to give it real good go.

One of the big lessons ive learn over the past 6 months is that great things take time, especially in Middle Distance running there are no short cuts!

The classes out here have generally been pretty easy and the team are a great bunch of lads.

Look like everyone's racing/training well and in particular its good to see Molloy back to somewhere near his best! 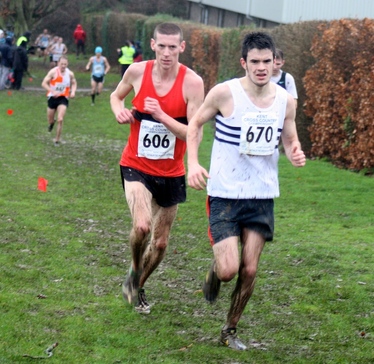 I've been slowly getting back into the running and haven't had (touch wood) any more trouble with the achillies. The last four weeks doing neurology have been my most hectic at UCL with a typical day in the hospital spanning 12-13 hours. Loved every minute of it although it meant that I didn't run as much as I would have liked! I'm now on an easier placement which should allow me more time to train.

Also did the Hyde Park relays on Saturday. I turned up and was asked if I'd run two laps as several people had dropped out... Ran leg 2 for the mixed team in around 17 minutes followed by leg 5 for the men's 1st team in 16m28. It was good to see the likes of Alex Howard and James Thompson having good runs in such nasty conditions.

Hoping to pop back for a session one weekend.

All the best
James

Just thought I would update you all on how im getting on out here and maybe give you an insight into the life of a student athlete.

First of all ide like to start by saying that i feel this was the best decision I could of made by coming out here, i did a lot of research into the program and feel i made the right decision in coming to Lamar over other schools.

Life out here is completely different to back home, I am effectively living the life of a full time athlete. A summary of my day would be wake up at 6.30 am go and get some treatment before running and then run at 7.am. We will then have second practice at about 3pm which is usually a light run then weights, core or stretching we then we get more treatment from the physios. A big change i have made out here is going to be bed a lot earlier most days I am in bed and asleep by 9pm which I think has made a massive difference in recovery back home on a good day I would probably be in bed by 12pm.

Before I came out i got a lot of negative feedback from people saying that il be put on stupid mileage and get over raced. That has turned out to be totally untrue and im actually running less out here than I was back home. I have no real aims for the indoor season and im not training specifically for it, the coaches just want me to keep building a solid base for a long outdoor season as I want to come back and race the English season this summer.

Aside from running it has been really good everyone is really friendly and the classwork has been pretty easy with not much work being set which is good.

I think im racing an indoor mile next Saturday so il let you know how that goes.

Good luck to everyone at  Southerns this weekend one bit of advice would be go off steady up that 1st hill!
Laurie