Tom Devlin made a return to track racing, whilst away studying at Newcastle University. Tom ran 1500m in 4.15.20

Full results are on the Results 2014 page. There were many highlights at the meeting including -
The under 17 womens 4x300m relay team setting a club record of 2.52.94. Two sprinters (Una Laqeretabua and Anna Woodward) combined with two middle distance runners (Hannah Czarnowski and Becky O'Hara)
Nicole Taylor moved from 11th to 4th on the UK all time 1500m steeplechase rankings with 4.59.94.
Alasdair Kinloch dipped below 9 minutes in winning the 3000m, Miles Weatherseed ran a pb of 1.56.44, Alice Ralph set a 1500m pb of 4.53.92.

Richard Westover ran a new personal best of 79.20 at the Outlaw Half Marathon, near Nottingham on Sunday. Richard is mainly a triathlete and took 19 seconds from his personal best.

UK Youth Development League (u13/15) at Reading, Saturday 31st May

Full results of plenty of action can be found at http://www.parkrun.org.uk/results/firstfinishers/
See Tonbridge and Royal Tunbridge Wells in particular. More details to follow, but the TAC Grand Prix standings from Mark Pitcairn-Knowles are shown in the file below.

There is a feature at the England Athletics web site, following a visit by their Chief Executive to the club recently. The link is -http://www.englandathletics.org/england-athletics-news/chief-executives-club-visit--tonbridge-ac

Thirteen TAC distance runners were in action at Eltham, over either 800 metres or 1500 metres, on Wednesday night. Summary results are on the Results 2014 page.

Despite the dull weather recently, conditions were good, being mild, dry and still and this helped towards producing some good performances. From the 13 there were 8 personal bests and 3 seasons bests.

Max Nicholls became the latest member of the 'sub 2 minutes club' at 800m, whilst brother Euan knocked a couple of seconds from his own best.

Chris Cohen improved significantly over the same distance. Chris probably has more to come, since he had to push on alone in his race, once the pace maker had dropped out.

Tim Faes again showed how well he has come through months of struggle with knee pains and growth related niggles and is developing into a really good athlete, now being down to 4.12 for 1500m.

It was good to see Robbie Farnham-Rose back and racing on a track, after a year without a race. He won the A-race 1500m in 3.53.20 and will now be hoping to build on this in races to come.

The Crick brothers Charlie (800) and Sam (1500) will have been pleased with their evening's work, as both ran pbs, whilst Michael Ellis continues to show that he is one of the most improved runners around this year.

Finally, its a shame that Ashley Gibson is still only a second claim member, as she would be in a good position otherwise to surpass Kelly Holmes' club records at 800m and 1500m, being only 1.2 seconds away from the former and likely to be quicker than the latter this season.

Nicola Wilkinson ran a personal best of 18.09 at Bristol on Tuesday evening.

John Harley ran 3.13 for the Edinburgh Marathon and finished second in the over 60 category. John reports that he went through halfway in 1.27 with his aim to break three hours, but  windy conditions and leg cramps held him back. His next target is the New York Marathon in the Autumn. 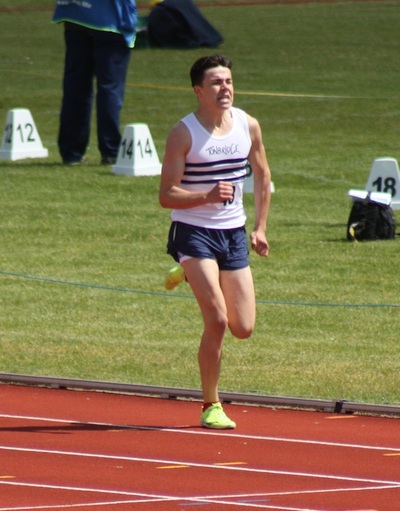 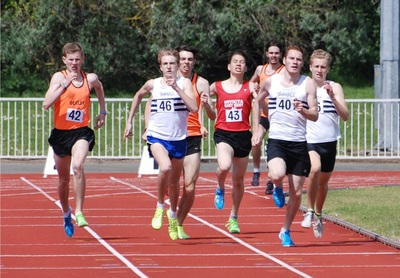 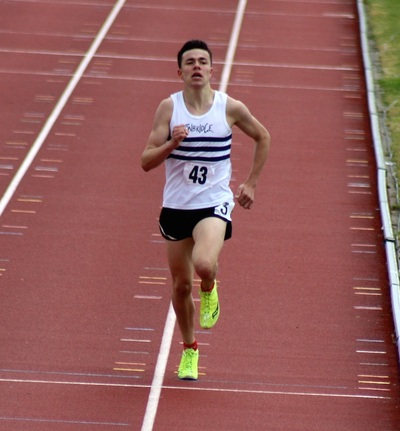 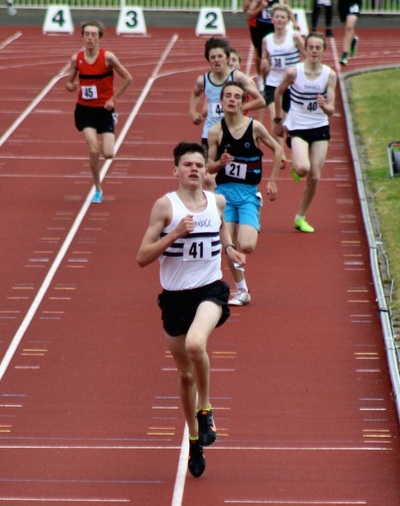 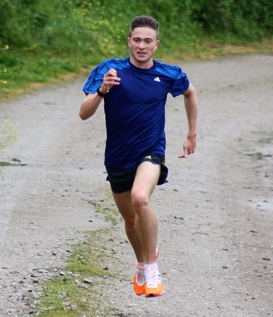 Laurie Probert ran 8.56.20 over 3000m and is now back training in Liverpool, whilst back from studying in USA for the Summer. Laurie commented that there is nothing to worry about, as the run was just part of a fuller training session, in preparation for a 5000m.

Nicole Taylor, running for the British Universities team, lowered her own club 3000 metres steeplechase record to 10.59.24 to improve by 25 seconds.

Sean Molloy, competing for Great Britain Juniors, finished 5th in the 800 metres with a season's best of 1.50.23.

Henry Pearce ran 9.01.72 for 3000 metres, competing for Loughborough University. Results are at http://lia.athletics-uk.org

Race videos are available at http://www.vincosport.com

Other weekend news, 17th and 18th May

Alex Howard, competing for Oxford University, won the 3000 metres steeplechase in the 150th Oxford Vs Cambridge Varsity match, with a new personal best of 9.29.93. This was a five second improvement from his time at the BUCS championships, earlier in the month. A video of Alex's race is available at http://www.vincosport.com/meetings/4119-oxford-v-cambridge-varsity-match/videos

Polly Pitcairn-Knowles ran her first ever fell race, in the inter counties championships, placing 18th of 19 runners in the under 16 age group. Full results are at http://www.race-results.co.uk/results/2014/fra.htm 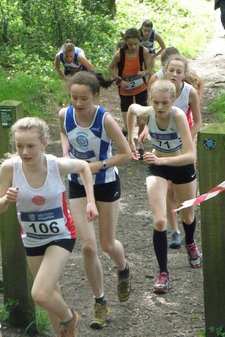 The BMC and Watford put on another cracking evening of middle distance running, with a number of TAC athletes having their first serious outing of the season.

The highlight for Tonbridge was Chris Olley's 3.54.64 for 1500 metres to take almost 11 seconds from his previous personal best.

Max Nicholls had the tough experience of being in the men's 5000 metres A race, but managed to take more than 15 seconds from his best time with 15.09.61.

Ashley Gibson went in the last race of the evening over 5000 metres and ran 16.21.31, which took 14 seconds from her four year old personal best.

Full results should appear at this link - http://www.race-results.co.uk/results/2014/
TAC had a number of teams in action with the W45 Women placing around 10th, M45s 28th, M55s 29th
Results at http://www.joelee.co.uk/resindex.html
Race video at https://www.youtube.com/watch?v=0cwohq9aRpk

Full report in file below from Mark Pitcairn-Knowles, including plans for veterans for the rest of 2014

Full results are now on the Results 2014 page. Tonbridge won the match, to make it two wins from two matches so far.

English Schools Track and Field Cup, 1st round, at Bromley, Thursday 15th May

Full results can be found against the Kent fixtures at http://www.esaa.net/v2/2014/tfcup/tfcup14results.php

Sean Molloy and Nicole Taylor have been selected to run in the Loughborough International Meeting on Sunday 18th May.

Sean will be racing over 800 metres for the Great Britain Under 20 Team, whilst Nicole will race for the British Universities and Colleges Team at 3000 metres steeplechase.

Nicola Wilkinson returned to racing action with an excellent 37.14 at the Bristol 10k today. This improved her personal best, set in October 2012, by more than two minutes.

Dan Watt ran his first ever track 10,000 metres on what was an awful night weather-wise, but a terrific occasion in all other ways. Dan ran 33.38.34 for fifth place in the first of the five races.

The event was in its second year, but on this occasion incorporate the GB European trials for men and women, which saw wins for Andy Vernon and Jo Pavey.

There was a barbeque, music and a terrific atmosphere generated by a few hundred supporters cheering the athletes on from lane four on the track !

Dan Bradley (16.55) was first home once again at Tonbridge, using it as a warm up for his 10am training session. At Tunbridge Wells Abianne Coates was the first female home with 22.14. Similarly, Lucy Reid was the first lady home at Durham with 19.38.

Mark P-K has come up with an age graded competition for those who run in the Tonbridge Parkrun, from TAC. Details are in the file below.

TAC had a handful of competitors at Watford on Wednesday night, for the open meeting 1500m races. There were 18 races over the distance, with the last ones going off at past 10pm.

Sian Driscoll ran her first 1500m race for a couple of years and recorded 4.52.01. Corey De'Ath returned to solid form with a 4.02.09 clocking. Then in the very last race James West ran 3.55.94, George Duggan 3.58.37 and Andy Combs 4.01.70. For Andy it was his first track race since 2011 and he only decided to race after a training session on Tuesday. Hopefully, all of them will be able to move forward, having got this early season race out of the way.

Meanwhile Graeme Saker took part in race six to help his niece around, who runs for Hallesowen.

Results are on the Results 2014 page.

British Universities and Colleges Championships, at Bedford, Monday 5th May - Day 3 of 3

There were three TAC distance runners in action on the final day of the championships and all of them ran personal bests !

Nicole Taylor produced a bronze medal performance in the women's 2000 metres steeplechase with 6.54.72, which reduced her own club record by ten seconds.

Dominic Brown very nearly produced another bronze medal run, as he finished 4th in the men's 1500 metres with 3.53.34. He just missed a medal by two hundredths of a second, but improved his pb from his semi final run. Dom is certainly capable of sub 3.50, since the race only really quickened in the second half and he beat plenty of athletes with superior pbs.

Alex Howard ran 9.35.01 in the 3000m steeplechase to take 9th place and be eight seconds quicker than he ran in Saturday's heat.
Photos courtesy of Richard Owen 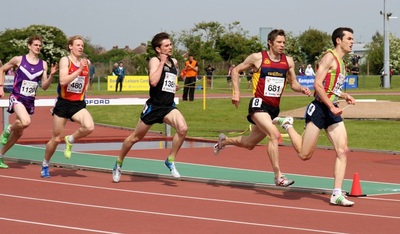 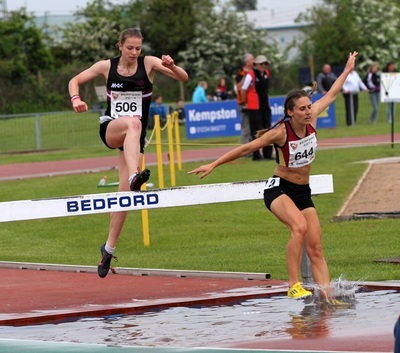 Dan Bradley front ran to a win in the 5 miles with 26.03, whilst Catherine Symons was the first lady home in around 31.44. Other TAC members racing included Joe Watts, Cain Bradley, Sally Musson, Steve Brooks and Maurice Marchant. 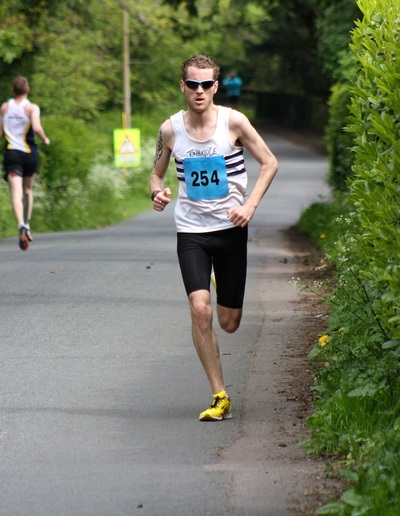 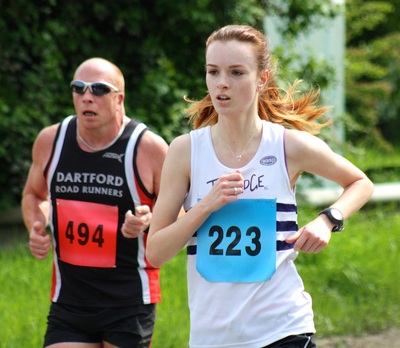 British Universities and Colleges Championships, at Bedford, Sunday 4th May - Day 2 of 3

Kieran Reilly, who is at Indiana University in USA, finished 10th over 1500 metres in 3.53.82. Kieran reports that a few things had gone wrong leading up to the race, which affected his run. 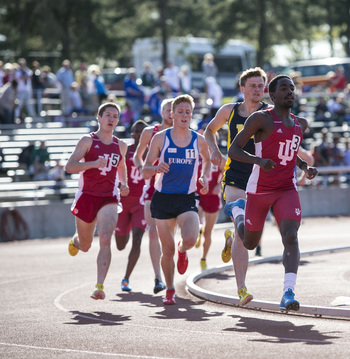 UK Youth Development League (under 13 and 15), at Southampton, Saturday 3rd May
Full results are on the Results 2014 page

Full results and a distance runners summary are on the Results 2014 page.

Its only now that I have completed a bit of analysis that I have realised the quality of some of the performances. I mentioned Sam Crick and Christian Lee's 1500m pbs on Twitter, but there were also some others of real note.

James Kingston and George Rowland ran 5.02.4 and 5.07.3 for the under 13 1500s, both taking more than 30 seconds from their best times ! They now have pbs that are not far away from what the likes of Robbie Farnham-Rose and Andy Combs ran at that age.

Julian Rendall placed second in the English 50km championship at Gravesend, in a time of 3 hours and 13 minutes. Julian will be hoping for another international call up, as a result of this performance. 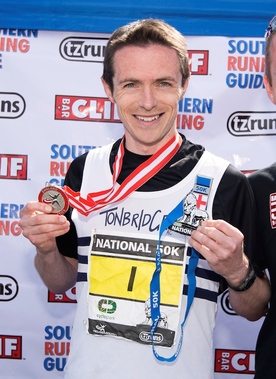 British Universities and Colleges Championships, at Bedford, Saturday 3rd May - Day 1 of 3