Tom Cox made his debut at a road 10km event and split a couple of excellent athletes from Sussex at the front of the race.

Tom finished second with 33.20 on a very demanding course and was 20 seconds down on Kevin Rojas and 14 seconds ahead of Neil Boniface. Both these two have recently run half marathons in 68 minutes and low 31 minutes for 10k.

The likes of Henry Pearce, Lucy Reid and George Duggan had perhaps their best cross country runs of the season so far. However, for others there were disappointments, especially three or four who had aspirations of getting near to the spots for an international call up.

With the cancellation of the Kent Cross Country League fixture, there were plenty who took on the Saturday parkruns instead.

Dan Bradley was first home at Tonbridge, with 17.05 and was followed home by Andrew Mercer and Stuart Brown. Abi Johnstone was the first official female with 21.23, although I believe Kathleen Faes ran, without being recorded in the results.

Sam Avis ran a pb of 18.52 at Maidstone, being the first TAC home and 7th overall, whilst at Royal Tunbridge Wells, Matthew Taylor (not 11 until February) was 4th with 20.34.

Results of all these parkruns and more can be found at -
http://www.parkrun.org.uk/results/firstfinishers/

Judd, Skinners, Sevenoaks and Walthamstow Schools, from the local area, all included TAC runners in their teams at the English Schools Cross Country Cup Final, held at Newquay, Cornwall.

There were some excellent performances, with Judd winning the Junior Boys trophy and Sevenoaks finishing second in the Inter Girls competition.

From an individual point of view the top runs came from James Puxty with second in the Inter Boys race and Phoebe Barker fourth in the Inter Girls.

The event was cancelled by the organisers, due to concerns relating to the potential cost of park repair, due to the muddy conditions. News is awaited as to whether the fixture will be rearranged.

The Tonbridge AC men's team won the South of England Team Championship with 38 points, from Belgrave's 46 and Hercules Wimbledon with 68.

It was a very solid performance by the team, led home by Ben Cole (5th) who only arrived back from a ten day trip to Australia on Thursday. Tom Cox (8th) followed him in, with Dan Watt (12th) perhaps having his best cross country race to date. Julian Rendall (13th) closed in the scorers.

Dan Bradley (19th), Jamie Bryant (33rd), Cameron Knapp (34th) and Greg Cole (41st) made up the eight to score team, which ended up with the same total of 165 points as Belgrave, who won that trophy, based on their final scorer position !

In the women's event we ended up with just three runners, having had Sally Mortleman go down with a virus. Nevertheless the three ladies ran well with Chloe Bird 18th, Nicola Summerfield 40th and Ellen Pitcairn-Knowles 67th. Full results awaited.

Maria Bragin was first home, in the year 7 girls race, at the Maidstone District Cross Country Championships on Friday.

On Saturday Michael Ellis sliced 34 seconds from his previous parkrun 5km time with an excellent 16.32 clocking at the Sheffield Hallam event. Michael was already one of the most improved runners at Tonbridge over the last year or so and this seems to continue his momentum.

Tonbridge parkrun - Andrew Mercer, who is a relatively new TAC member, was first home in a new personal best of 16.52. Phoebe Barker showed that she is getting back to her best by being the first female home in 9th overall with 19.54.

Maidstone parkrun - Graeme Saker was third home, just outside his best in 17.06.

Full parkrun results are at - http://www.parkrun.org.uk/results/firstfinishers/

Alex Howard ran as a guest in the Oxfordshire, Bucks and Berks county championships and finished 6th on Saturday. Results are on the Results 2014 page.

Kieran Reilly had a disappointing race at the NCAA national cross country championships in Indiana, USA. Kieran struggled home in 232nd of 246 finishers.

On Sunday Jack Keywood, who is at the University of East Anglia, finished 29th in the Norwich Half Marathon in 82.06. Results are at http://www.chiptiming.co.uk/results/?sport=1&year=2014&event=335&race=236

Also on Sunday, Ben Foreman made a competitive comeback, running 2.08 to finish second in an indoor 800 metres, for London University.

Ben Reynolds, who is a second claim member of TAC won the home international veterans race, for over 50s at Nottingham.

There were many TAC girls and boys in school years 7 and 8 competing. Results of the top finishers are on the Results 2014 page.

James Kingston won the boys race and Lizzie Miller was 2nd in the girls event. Photo below - James after his win. 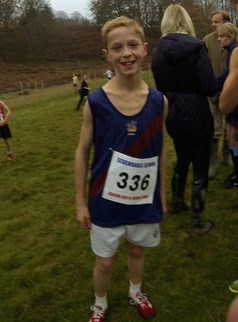 Wednesday action, outside of the club, 19th November

Harry Paton finished third in the Police Vs Fire service Vs Probabtion service cross country championships. This improved his position from 7th a year ago.

Judd School had a very exciting tussle with the host school at the St Albans cross country relays. Judd very nearly reversed the results from recent times, but were pipped on the line. The Judd team consisted of Stuart Brown, Miles Weatherseed, Toby Ralph, Jesse Magorrian, Dan Blades and Will Whitmore, all from TAC.

Charlie Joslin-Allen, representing the England under 20 team finished seventh in the Junior Mens race and was the first Englishman home. Results are on the Results 2014 page. 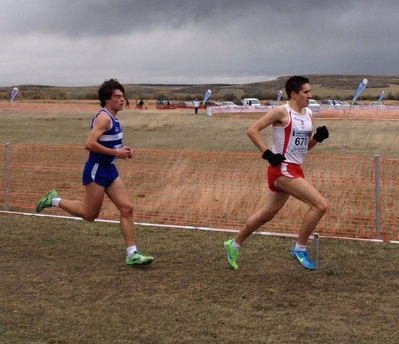 Michael Ellis, competing for Sheffield Hallam University had a good race to finish 19th in this South Yorkshire League event.
Full results are on the Results 2014 page.

Lucy Reid ran a superb 36.09 in the ultra fast Leeds Abbey Dash 10k and finished as 35th lady home. This took more than two minutes from her personal best that goes back to 2011. This is also faster than Deirdre McDermot's listed club 'record' of 36.45. However, we have now verified that Miranda Heathcote ran 34.06 at Barnsley in 1998. 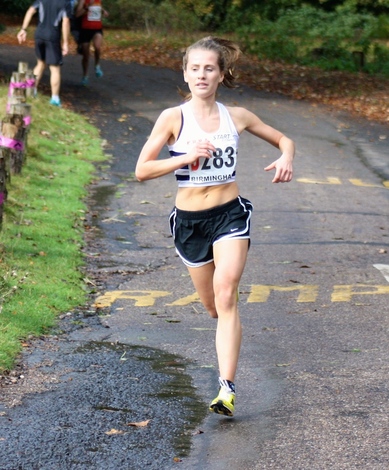 Robbie Farnham-Rose finished 18th in the South Regional Championships, held at Tallahassee, Florida. Robbie ran 30.58 for the accurate 10k and was 50s down on the winner. He was the first scorer for Alabama and I would imagine is quite pleased with the run. This was his first completed 10k on one of the USA 10k courses.

Kieran Reilly finished 62nd in the Great Lakes Regional Championships at Wisconsin. Kieran ran 31.31 for his first ever 10k cross country race in USA. Kieran was the sixth man home for Indiana, who I believe have qualified for the National Championships, being held next weekend.

The Tonbridge AC three man team that competed in the Great South 10 miles on 26th October have finally been declared as the National Champions. See the announcement at the England Athletics web site -
http://www.englandathletics.org/england-athletics-news/team-medals-for-the-england-10m-championships-announced?nid=267&userId=-1 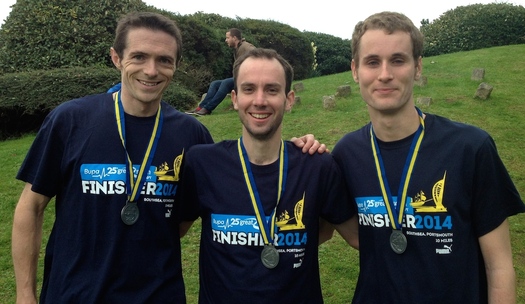 Max Nicholls, who is studying at university in London, won this midweek league race. Ryan Driscoll was, I believe, the only other TAC runner, who like many use it as a training run. Ryan was around 10th/12th.

Charlie Joslin-Allen has been selected to run for England Under 20s on 17th November, at the Burgos, Spain cross country international. This will be Charlie's first international vest, following on from an England Schools vest.

Details of the England teams are at - http://www.englandathletics.org/england-athletics-news/team-selections-for-cross-country-international-in-spain 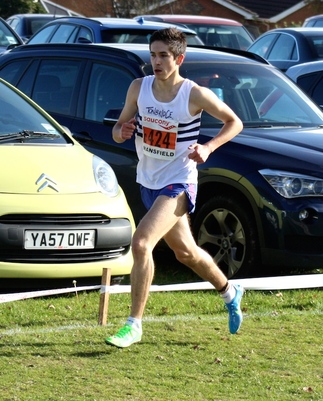 There were seven races at the Kent League, as no senior mens event was included with this fixture.

Nicole Taylor was a convincing winner of the Senior Women's race, Alasdair Kinloch won the under 17 men's and Kathleen Faes the Under 15 girls. Kathleen's run was particularly impressive having won the regional round of the English Schools cup earlier in the day.

As far as the teams are concerned there were TAC wins in the under 13 girls, u15 boys, u17 men and senior women. 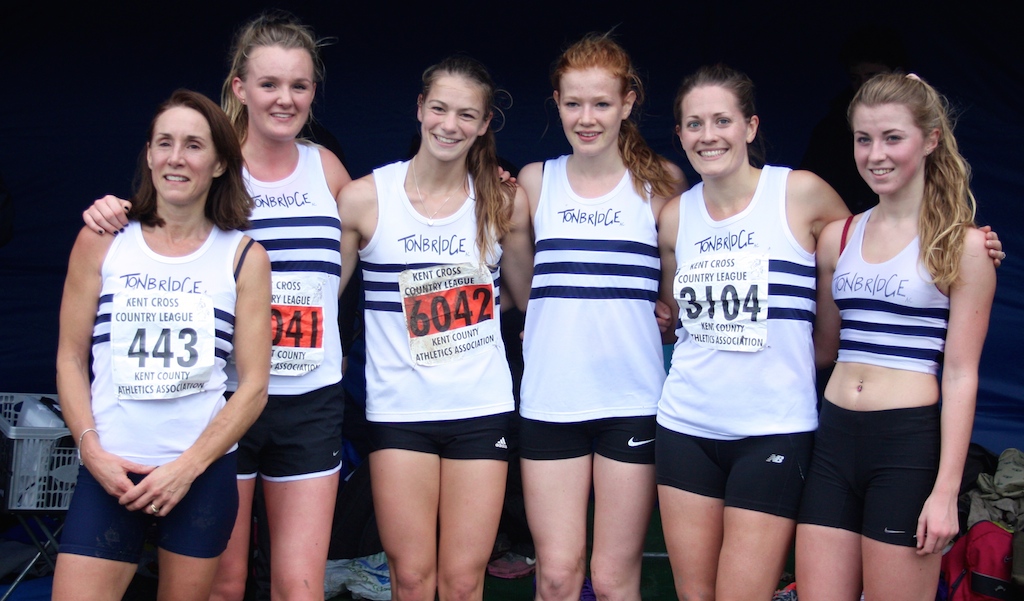 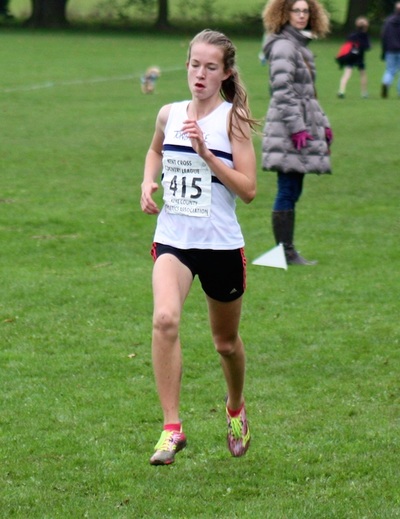 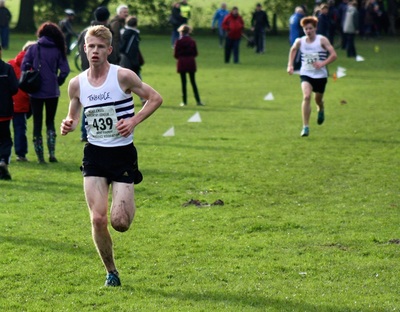 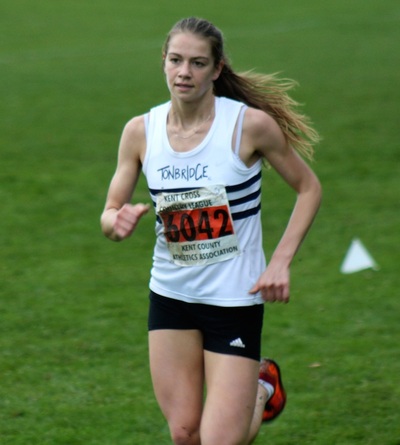 Alex Howard finished 17th in the Chiltern Cross Country League, as Oxford University were using it as a trial race for the upcoming varsity match.

A good number of TAC young athletes competed for their schools at Knole Park. Judd won both the Junior and Inter Boys competitions, whilst Sevenoaks won the Inter Girls.

Kathleen Faes commenced a busy day with a superb win in the Inter Girls race, beating some top quality competition in fine style. James Kingston was 4th in the Junior Boys. James Puxty led a whole host of TAC athletes in the Inter Boys, as he finished 2nd and Vita Milana was 6th in the Junior Girls event.

Full results are on the Results 2014 page. Photos courtesy of Ian Blades

Full results are at - http://www.parkrun.org.uk/results/firstfinishers/

The whole squad of athletes plus supporters put in a superb effort at these National Relay Championships. It was yet another step forward for the club in terms of results, as the development of good age group results continues to feed through to the senior ranks.

The under 20 men's team of Chris Olley, George Duggan and Charlie Josilin-Allen will get the plaudits, for a superb win, but once again the senior men surpassed anything achieved before. Ryan Driscoll, Henry Pearce, Tom Cox and Ben Cole finished 9th, which is a ten place improvement on the club's previous best.

On top of this the under 17 men almost snatched a victory, but were just pipped by Aldershot. However, Jamie Goodge, Chris Cohen and Alasdair Kinloch also put on a great show. 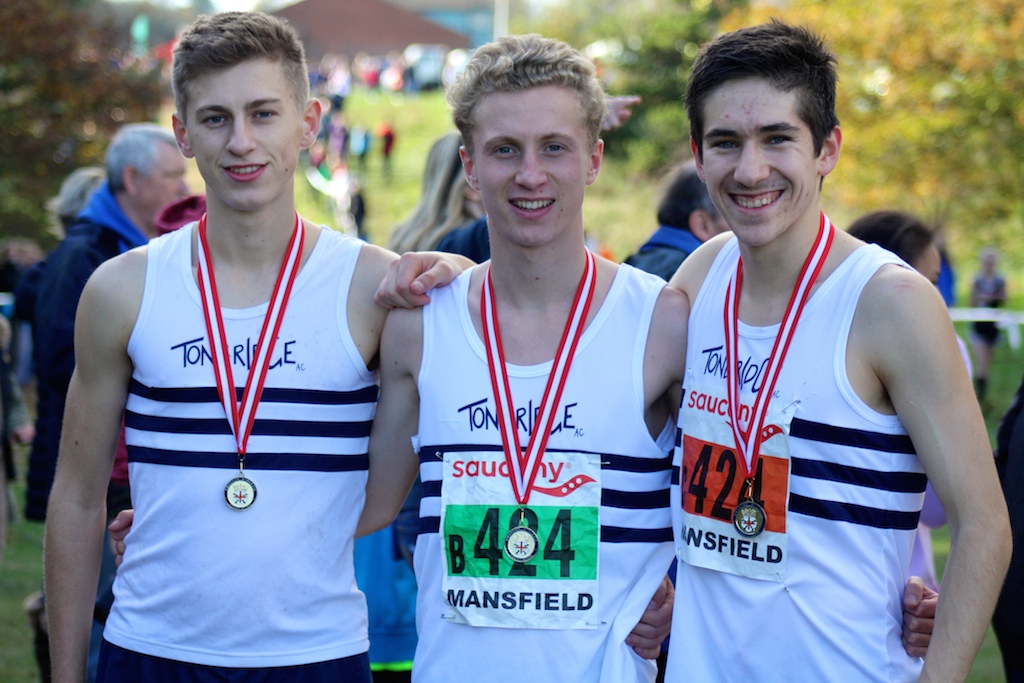 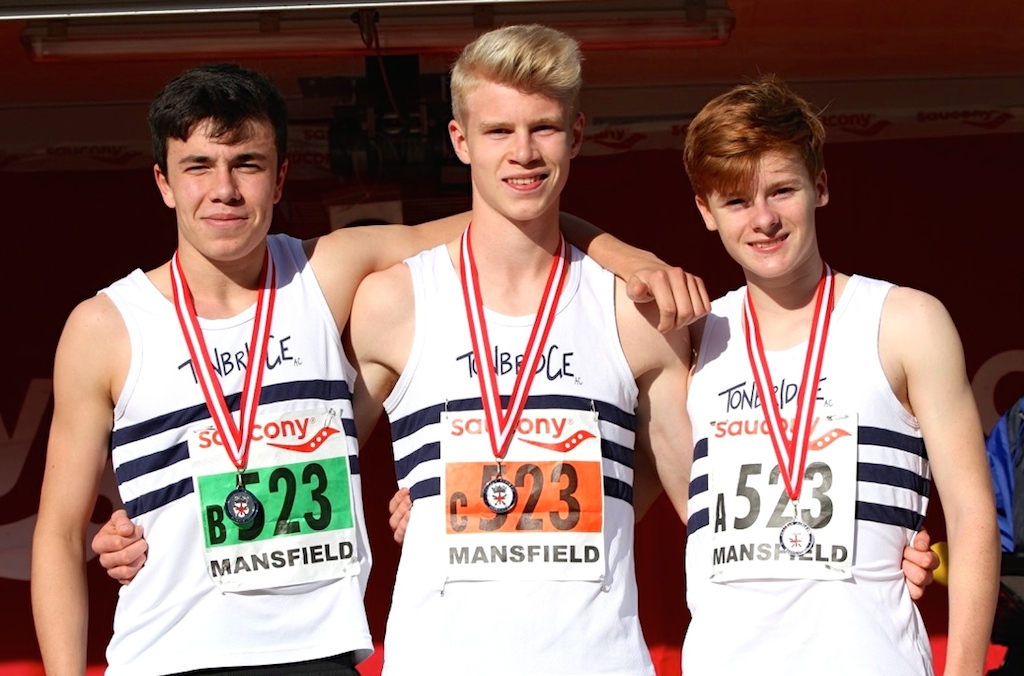 Tonbridge still managed to have a team at the Reigate relays and finished 7th. Graeme Saker (14.50), Matt Harvey (16.01), Adam Styles (15.20) and Greg Cole (14.59) made up the team.
Full results are at http://www.rpac.org.uk/index.php?p=prioryrelayspreviousresults 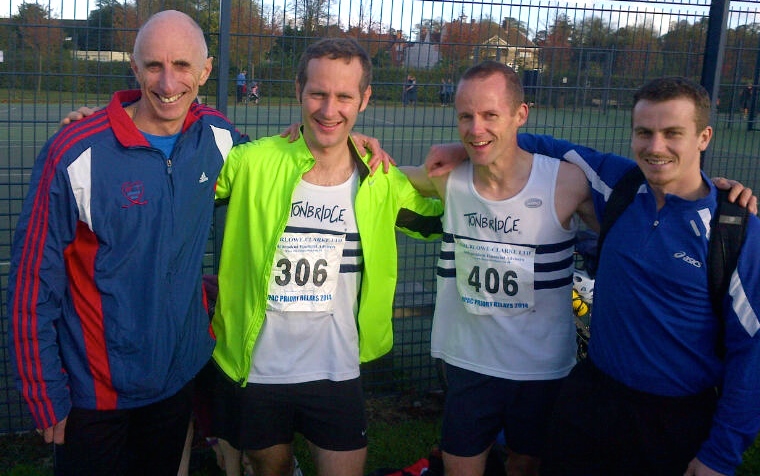 On Sunday Kieran Reilly, racing for Indiana University, finished 46th in the Big 10 Conference Championships, in 24.43 over 8km. Full results can be found at the following link -
http://grfx.cstv.com/photos/schools/ind/sports/c-xc/auto_pdf/2014-15/misc_non_event/BigTenMensResults.pdf

Also on Sunday, John Harley ran 3.14.07 at the New York Marathon to finish sixth in the over 60 category. John also completed London, Chicago, Berlin and Boston in recent years (medals below) 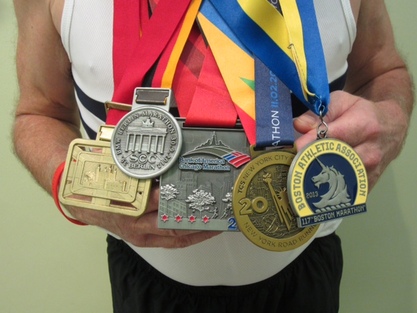 With everything else going on there were only a few TAC park runners this weekend. However, Andew Mercer was first home at Tonbridge in 17.13. A few other TAC also ran. At Maidstone Emily Hale ran 23.07, whilst Royal Tunbridge Wells was cancelled, due to preparations taking place for a firework display in Dunorlan Park.
Full results at - http://www.parkrun.org.uk/results/firstfinishers/