Please contact markhookway@icloud.com should you have any questions or contributions regarding the web site. Some pages are password  protected, so please contact me if you need the current password. See www.tonbridgeac.org.uk for further information, including new member enquiries.Site created by Mark Hookway copyright 2020.

Full results in the file below. More details to follow.

​Teams will be posted on the Team Selections page.

Please ensure
All adults have NHS track and trace app for scanning at the event.
Only have 1 companion per athlete
Arrive 1 hour before your race
Leave the venue as soon after as possible

The three TAC athletes taking part in this high class event performed excellently. With the vent run in small waves, chip timing was used to establish the overall results.
Ally Kinloch was 4th overall in 14.23, which was 1s inside his pb.
Stuart Brown was 18th in 14.49, which improved his recent pb by 26s.
Kiri Marsh was 14th female in 16.54, which was pb by 21s.
Full results can be found here - www.titaniumresults.co.uk/results.aspx?CId=19747&RId=119&EId=3&dt=0&adv=0

Sussex Athletics Association Meeting, at Lewes
At Lewes, in extremely windy and wet conditions on Sunday, Fenton Davoren (under 17) made his debut over 3000 metres and ran 9.32.66, gaining 2nd in the Sussex Championship. Olivia Breed (under 15) had her first track race for sixteen months and ran 5.11.26 for 1500 metres.

Hastings Seafront 10km road race
The Hastings Seafront 10km took place on Sunday, with significant Covid guidelines, including entrants setting off at ten second intervals, with results based on the electronic timings recorded. Jacqui O’Reilly won the women’s competition in 43.03 and Dan Bradley was 2nd in the men’s event in 32.54, as seventy competitors took part. Grazia Manzotti ran 49.43 and Deniz Bowart 51.25.

Virtual London Marathon
​The London Marathon was cancelled as a mass participation event this year, due to the virus pandemic, but entrants were given the opportunity to run a ‘virtual’ marathon from near home, over a course of their choosing. Personal GPS watches recorded the time and distance and four Tonbridge AC runners took part. Emma Hollands ran 3.26, Penny Pilbeam 3.40, James Winnifrith 3.49 and Eva Kolivoskova-Martin 4.40.

MK 5km, Milton Keynes
This event at Milton Keynes attracted some of the country's top distance runners, plus a few from abroad. In fact the men's and women's winners were Ryan and Genevieve Gregson from Australia.
Corey De'Ath was the fastest of the three TAC runners as he recorded 14.46, to equal his pb. This placed him 18th overall.
Stuart Brown ran 15.15 and was 40th overall, although he sprinted to win his 'wave' race of 10 runners, as groups went off every five minutes. Stuart had not raced a 5k before but has a Parkrun pb of 16.17.
Luke Fisher was 67th in 15.42, which is a 19s pb.
Full results are here - www.mkac.org.uk/static/NobleProMK5kPBSpecial2020Septresults.htm
Hever Multi Terrain Half Marathon
James Taylor (JT), the TAC Club Chairman won the Hever Half Marathon in 82.03.
​Full results are here - www.stuweb.co.uk/race/2Fh/

Above - Kiri Marsh at the Bassingham 5 mile race

There were five TAC personal bests set at Bromley on Monday evening.

Friday Tim Weathall Miles, at Nottingham
Kiri Marsh won a 1 mile track race in 5.04.6.
Saturday, New Forest Multi Terrain Marathon
Steph Puxty ran her debut marathon in 4.46.42
Sunday, Yeovil Open Meeting
Josh Prendergast moved to third on the UK under 15 boys' 3000 metres rankings for 2020, when he finished second at Yeovil in 9.05.99. It was a pb by 37.0 seconds.

James West finished second to Stewie McSweyn of Australia on Tuesday night, setting a new TAC men's 1500 metres record of 3.34.56. This was a pb by 1.2s and James held the previous record. It ranks him 23rd now on the UK All Time list  -
​thepowerof10.info/rankings/rankinglist.aspx?event=1500&agegroup=ALL&sex=M&alltime=y

Kieran Reilly finished 6th in the Men's A race in 3.45.18, which was a personal best, seven years after the last one that he set !
The time moved Kieran into the TAC top 10 all time list, pushing Steve Fennell out.
The in-form Steve Strange won race 11, in 3.54.60, which was a pb by 3.1s. The only other competitor was Miles Weatherseed who did not finish his race.
Full results are here - data.opentrack.run/en-gb/x/2020/GBR/fifteen-1500s/event/1/ 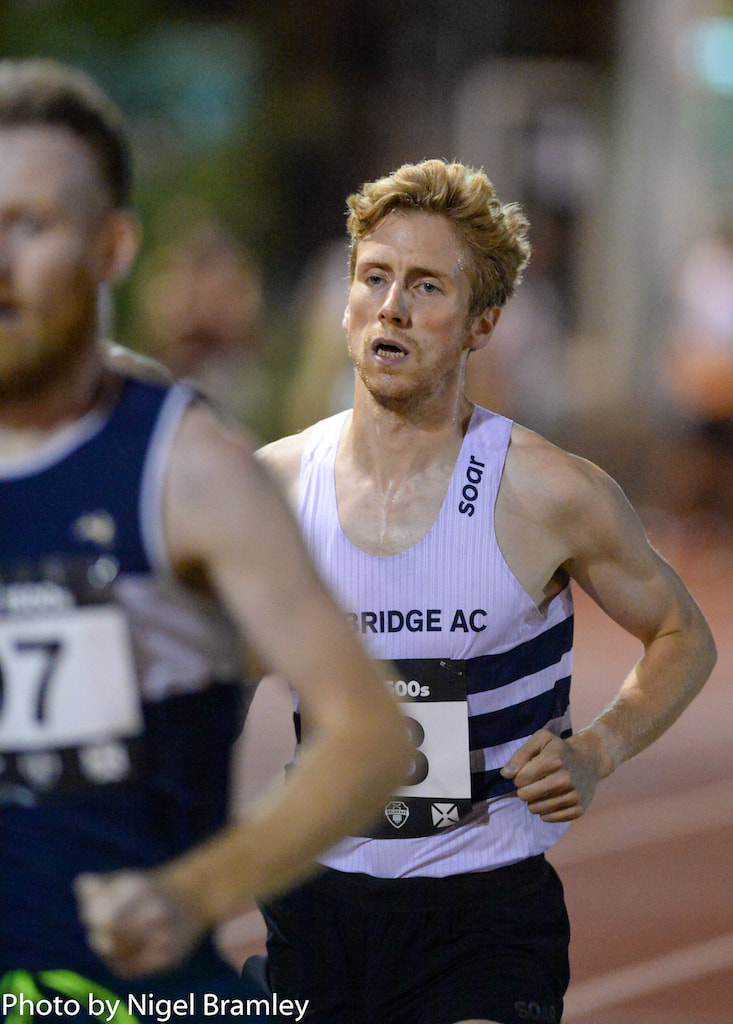 Tina Oldershaw won the women’s race at the Wingham Run near Canterbury, on Sunday. Oldershaw ran the 10 kilometres in 41.20, more than three minutes clear of the second female finisher. Like many other similar events that are currently taking place, runners start in small waves, being socially distanced and positions are determined purely from the times recorded over the set course.

BFTTA Open Meeting, at Dagenham
Josh Prendergast recorded one of the fastest ever times by a TAC under 15 boy, when he won an 800 metres at Dagenham in 2.02.61. This improved his recent pb by 4.5 seconds and moved him to sixth on the UK rankings for the age group.
South London Harriers Open Track Meeting, at Coulsdon
Charlie Crick finished second over 800 metres in 1.55.40.

See the email to all the TAC distance runners on 8th September with details of events at Bromley and Chelmsford, plus Parkrun news.

This was posted on the ECCA Facebook page on Thursday -
Just updating our followers of our efforts to salvage at least some of the XC season.

COVID 19 regulations do provide many hurdles and hoops to go through, but we feel that competition in some form at least needs to be provided if at all possible.

Clearly we cannot have a National Championships in the normal format. So please accept our apologies.

However, we are now able to advise that we are planning to hold the English National Cross Country Relays within the Covid 19 restrictions that currently apply, at Berry Hill Park in Mansfield. The probable format will be to host the event for all age groups over two days – 31st October and 1st November – but entry will be invitation only. Invitations will be sent to the first 30 clubs (‘A’ teams only) in each race at the 2019 championships.

​Full details will be sent to those clubs in due course.
We will provide updates as the preparations unfold.

Above - Right : Charlie Crick and Left : Sean Molloy at Aldershot

Other weekend news, Saturday and Sunday 5th and 6th September

TAC had five distance runners at the British Championships, although all will be a bit disappointed with how it went.
James West was the only one to qualify for a final and finished 4th in the 1500 metres, having hoped to challenge for the title.
Sean Molloy and Ben Murphy were in the 800 metres, whilst Miles Weatherseed and Kieran Reilly ran the 1500 metres.
Full results can be found here - www.uka.org.uk/results/20200904_Manchester/timetable/index/

At Tonbridge, on Monday, Ben Murphy won the fastest 800 metres in 1.51.92, from Miles Weatherseed who recorded a pb of 1.52.80 in second. James West had finished second in an 800 metres on Saturday, at Lee Valley in 1.49.29, in cold, wet and windy conditions and together with Reilly, Murphy Weatherseed and Sean Molloy, is due to compete in the British Championships. Of the female 800 metres runners Annabelle Hales and Lily Stewart, who are both under 17s, recorded personal bests of 2.21.23 and 2.21.57, respectively.

Results can be found here -
​data.opentrack.run/en-gb/x/2020/GBR/tacaug/event/

In total contrast to the past week the TAC performances were disappointing and the weather awful ! Results to come and videos being loaded. James West finished 2nd in the mens A 800 metres in 1.49.29, whilst Ben Murphy (800m), Miles Weatherseed (1500m) and Sean Molloy (1500m dnf) were all below par.
Results are here - www.britishmilersclub.com/results/results.aspx?meetingid=407579

Above - James West finished 2nd over 800 metres at Lee Valley

Ally Kinloch bounced back from what was a disappointing race on Tuesday to record a 6 second pb of 14.24 and finish 9th in this top quality road race.
Full results are here - runcheshire.niftyentries.com/Results/Mid-Cheshire-5k-Summer-2020#

There were eight 3000m races at Wimbledon in superb conditions, as the winds had dropped totally. There were two TAC runners in the fastest seeded race of the night and they produced a superb 1-2 result.
Kieran Reilly won in 8.17.3 with Steve Strange coming home in 8.18.0 and taking 28s from his pb ! Both ran around 60s for the final lap.

Alasdair Kinloch had his first race of the season, running 8.40.92 for 3000 metres, in wet and windy conditions.
Full results are here - www.britishmilersclub.com/content/bmcitemdisplay.aspx?itemid=1677
Videos are here - www.runjumpthrow.com/event/british-milers-club-open-meeting-25-august-2020/

Josh Prendergast (u15) convincingly won his 800m in 2.07.17. Josh’s time improved his best by almost six seconds from last year.

​Kieran Reilly  (senior) finished 2nd in his 800 metres, when returning to his old university. In what was his opening track race of the Summer he recorded 1.53.61.

Due to the current restricted guidelines with numbers and competition conditions, the meeting will now be for Tonbridge AC members only.
Many thanks to all members who responded to the recent email with event choices. The timetable is now been constructed using the feedback provided.
Please watch out for further information.

Above - Steve Strange at Chelmsford

I have posted some videos of time trials that have taken place recently.
See the Race Videos Summer 2020 pages.

See the Training Planned page for some schedules and advice. This includes a generic schedule for those seeking some structure and guidance.

To those who knew him I am truly sorry that we had to say goodbye to Oscar yesterday. He had the best possible life and enjoyed nothing more than being surrounded by people at cross country events.

Many thanks to everyone who has messaged.
Mark and Dawn